Maribor will host two giant slalom world cup races for women on 16. - 17.January 2021 and despite the pandemic, preparation activities are running as planned. Snow is covering more than two thirds of the race course, the organizer and the main sponsors closed the sponsorship deals. Today, two main sponsorship deals were signed. First one with the long term general sponsor Zavarovalnica Sava and the second one with NLB, which means the contract was prolonged till 2022 and 2023.

David Kastelic, Chairman of the Board and President of Golden Fox OC:

“Even though the Golden Fox will be different this time, it will still be one big celebration. There will be no gatherings or socializing, no viewers on the stands, but the event will be competitive and this is the most important for Maribor, for competitors and for Slovenia. It is the biggest event in Maribor and one of the biggest sports events in Slovenia. I am sure this Golden Fox will be marked with nice memories. As the President of the Organizing Committee I can assure you all Committees adapted to new circumstances and are working according to the guidelines and I am sure the weather will be in our favor. This Golden Fox will be different, but it will be in Maribor. As a representative of Zavarovalnica Sava I am very proud to be a part of Golden Fox for so many years now and intend to continue this way in the future. This event is our flagship, we are excited to bring this gift to Maribor and Slovenia.”

Blaž Brodnjak, Chairman of the Board  NLB:

“Golden Fox is a national, not just regional holiday.  Nova Ljubljanska banka is proud to be a part of it again since the previous year. Last year we moved to Kranjska Gora and created a wonderful event. This year the race will stay at home, at Pohorje slopes and our animation campaign will do its best to recreate the cheering spirit as there will be no viewers at the venue. We will virtually bring the fan’s cheering energy into the finish area and cheers for the competitors. Last year’s event was something special, but this one will be remarkable as well, which made the decision to prolong the sponsorships into 2022 and 2023 even easier. Golden Fox is a movement that creates positive energy and development to the North-East part of Slovenia, especially when we all miss sports and culture. Now is the moment to be socially responsible, to join forces and support such events. Compliments to Srečko and his hard working team, I am sure this Golden Fox will be an excellent one! We are looking forward to this race and the ones to follow in the future. Last year in Kranjska Gora Slovenian skiers reached the podium and we celebrated their success, which I hope will repeat at 57. Golden Fox. All the best to athletes and organizers, we promise to bring the cheering fans!”

“Entire organization is working in weird, different circumstances, but everything is going well, as planned and following all recommendations of FIS,  NIJZ and the government. We adapted, there will be no fans, no accompanying fun events. But there will be the most important thing, the race itself. Race will be organized by following very strict rules, all participants will be divided into three bubbles, one will be special for athletes. 89 athletes from 25 teams are registered for the race. Combined with accompanying personnel this means 184 persons in total. This bubble will also include FIS representatives and only a few organizers who are directly involved in competition. The second bubble will include the press representatives, who will have precisely arranged access and the third bubble includes the entire organization team.

Snowmaking on Pohorje is ongoing according to weather conditions, upper parts of race course are 90% finished. Lower parts still need two more cold nights so the entire racecourse will have at least 40 cm of hardened snow layer as required by FIS. Snow control is scheduled for 7. January 2021, so we do have enough time left.

Financial budget of 57. Golden Fox is similar to last year’s, 1.1. million EUR, of which 70% is provided with international contracts, 30% with our sponsors.  Help and support given by our companies, especially Zavarovalnica Sava and NLB are incredibly important to us. We are very pleased as NLB prolonged the contract for additional two years.

We will manage to avoid some costs this year, but on the other hand the safety measures created new expenses. We remain optimistic to finish the event with positive outcome and ensure further activities for Alpski smučarski klub Branik.” 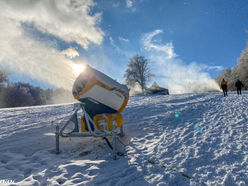