The battle is on

Snow controller and Race Director of  World Cup Women Technical Events, Markus Mayr is arriving to Maribor on Thursday morning. Organizers are anticipating cold weather from Wednesday night on. Luckily they produced enough snow in January so even last wave of warm temperatures left a sufficient layer of snow on Pohorje slopes. » We still hope we will be able to run the snow cannons as we  need to do some work on the slopes «  said Mitja Dragšič, Chief of Golden Fox race.

Nevertheless, we are used to these conditions at Pohorje. It will be a battle, but The Golden Fox never gives in. 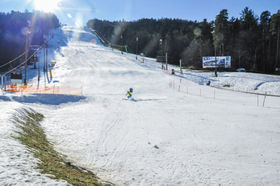