Success of Meta Hrovat and team captains acclaim for a successful organization made it worth the efforts - See you at 58. Golden Fox in Maribor!

”We succeeded! We successes from the organizational point of view and looking at race results. When Meta Hrovat took 3.place, it was worth all the efforts from demanding venue change, adjusting to the epidemic, race course preparations. We opened the hotels in Kranjska Gora, organized a drive-in Covid center, tested around 500 people (all were negative) and managed to prepare an outstanding race course after hardening enormous amounts of snow. I would like to thank everyone who literally worked day and night in extreme cold, thank you RTS Kranjska Gora and thank you Vitranc Cup Organizing Committee. It was not easy, but we succeeded! Many team captains congratulated us for the amazing race, we also received positive acclaim from FIS representatives. Unfortunately, we had to move the race again from Maribor, but we organized an amazing Golden Fox in Kranjska Gora and Slovenian skiers achieved their biggest success this season, at home.  See you at 58. Golden Fox in Maribor!” 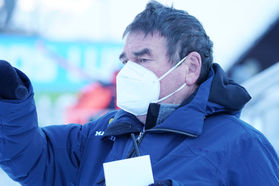