Snowmaking system and weather are getting better

Marprom leveled up the snowmaking system last summer by adding multiple water cooling towers. The snowmaking capacity is increased the most in upper Giant slalom slopes above Trikotna jasa. Along entire Golden Fox race course streching from Habakuk to finish area at Hotel Arena, there are in total 21 snowcannons with two water sources available.
Snowmaking system is key on Mariborsko Pohorje for opening the skiing season which started in mid
December and one week later in Areh. Finish area was covered in snow already at beginning of December, but not for long as temperatures started to go up and down. So if you ask us what is new, we can easily say the new snowmaking system, while the weather is playing old tricks again. 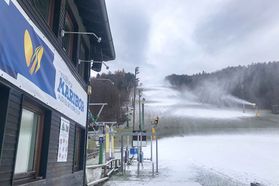