Skiing all the way to Trikotna jasa

Skiing season finally started  today in upper Pohorje slopes. While orgaznizers of 56th Goden Fox still have plenty of time, mild winter made reacreational skiers a bit impatient as they lost almost half of season so far. Snowcannons covered the slopes in white three times until now, yet this weekend will bring temperatures low enough to open the slopes at Poštela ski lift. Lower part of slalom racecourse along ski lift Radvanje is not yet open for skiing as the snow layer is sufficient for sledding only.
In upper parts over Habakuk,  past Luka and along Poštela the snow layer enables skiing in narrowed slope only. However, the area from giant slalom start to Trikotna jasa has a decent snow coverage which would be sufficient for the race. Weather forecast for next few days is promising some cold temperatures and Marprom team hopes they could run the snowcannons for a few hours at night. Marko Rataj: »We need more snow in lower parts. Luckily there is enough of water, so we are just waiting for the cold. This winter we could not  run the snowcannons in full capacity yet.« 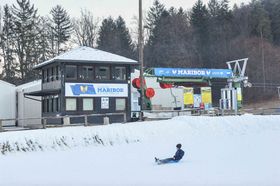