Zavarovalnica Sava d.d. and  NLB d.d.  officially signed  sponsorship deals as main and general sponsors of 56th Golden Fox in Hotel Arena last week. Both presidents of the board attended the press conference for the upcoming event. David Kastelic, president of the board at Zavarovalnica Sava d.d.:” This is the most important sports event in the region and one of the biggest sports events in Slovenia. I am sure it will be celebrated in a way sponsors and Slovenians will be all proud of.
President of the board at NLB, Blaž Brodnjak: “Even after privatization, NLB remains a Slovenian bank and our sight reaches far over Trojane. Besides supporting 100th anniversary of SNG in Maribor and being an official sponsor of Golden Fox, NLB is trying to say we have big ambitions in the region and we are aware of challenges that come along. We plan to take the opportunity to gather various business stakeholders at the Golden Fox event and promote the region itself and Slovenian economy.”
Further into the conference, Srečko Vilar gave the following statement regarding status of the Golden Fox project: “Everyone is already in full operational swing and a great deal of work for marketing committee was already done. Marketing committee led by president Trivo Krempl, has set themselves an ambitious work plan and they are doing well. All activities in all committees are going as planned.This means technical board is involved in stadium preparations, from removing the rocks on slopes and cleaning the rest. Overall we are pleased, and we are expecting the temperatures to drop”. 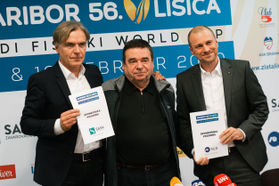