Meta Hrovat, Kranjska Gora's local took advantage of home slopes at first GS run. She  positioned right after Petra Vlhova from Slovakia and New Zealand’s Alice Robinson. For first and second placed competitor, crucial part of the first GS run was last slope at the finish area, where Petra Vlhova gained her speed and Alice Robinson lost her advantage due to an error.

Meta Hrovat is eager to reach higher: »It was not perfect, I still have some reserves.I will attack even more in second run!«

Her successful run gave Tina Robnik some extra boost and she was behind her national team mate for only 0,18 s. Ana Bucik will chase her best ranking during a second run.

All competitors also mentioned how amazing the course is. Without a doubt, this is the most well hardened course of the season. Currently Podkoren is hosting about 3.500 spectators. The biggest fan base, more than 1.000 fans, arrived from Slovakia to support Petra Vlhova. 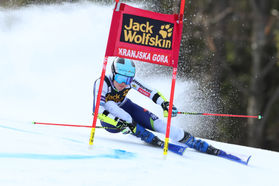