Golden Fox in the upcoming season in Kranjska Gora

Enzo Smrekar, president of the Ski Association of Slovenia, presented the decision on the organizer of the prestigious event in Kranjska Gora together with the new general secretary of the Golden Fox, Gregor Lednik, at a press conference. "Hard work was done to keep two women's races in Slovenia," said Smrekar. Lednik assured that they started work and preparations 14 days ago, with which they want to ensure the return of the Golden Fox to its "home" in Mariborsko Pohorje already for the 2023/24 season. "The 59th Golden Fox will be in Kranjska Gora, and we hope that the jubilee 60th Golden Fox will be in Maribor again," he emphasized.

The tradition of organizing women's races for the World Cup in Alpine skiing in Slovenia will not be interrupted. Branik Maribor, the organizer will begin to solve the problems with the lack of snow, which caused the Golden Fox to seek refuge under Vitrance in Gorenjska, by arranging an alternative or reserve route higher up on the Pohorje, if there is not enough snow on the traditional Maribor route. "We want to justify the trust of the Skiing Federation of Slovenia, the 60th Golden Fox will be an event that has never happened before in the Women's World Cup," said Gregor Lednik. 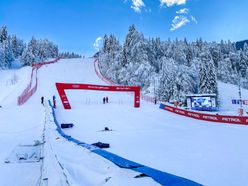