At this time skiing conditions on Pohorje slopes are ideal. Organizers are sure if skiing control was scheduled for today, the FIS snow controller Markus Mayr would give »the green light«. Considering snow control is scheduled for 6. February, organizers are calm. Srečko Vilar, General Secretary of Organizing Committee: »All preparations are going as planned so we are not worried about the racecourse. Until snow control the slopes are open for recreational skiing which should improve snow structure. After that we will make further adjustments in cooperation with Markus Mayr.»

»Important thing is we have sufficient number of snow cannons and sufficient water supply and Milan Šmon's team in charge for snowmaking takes advantage of cold days to create the proper snow layer. Entire racecourse is covered with 70-80 cm of snow spread on entire width of slopes, which is more than we need for the race. In upper parts the snow layer is hardened enough, in lower parts the process will be done by skiing. This will enable the snow structure to mix, larger crystals will crumble and become homogeneous. Even though the weather forecast was not on point until now, the most important thing is we are not losing the snow. At the moment we need to provide enough snow in upper part of Habakuk, in the warm up area for competitors. At Trikotna jasa there is some inversion causing minor trouble, but so far so good. We are anticipating the snow control in calm spirit« said Chief of race, Mitja Dragšič. 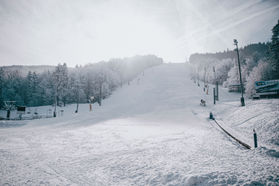