Everything ready for amazing ski races

Two days prior to first race, most challenges organizers were facing couple weeks with moving an entire organization from Maribor to Kranjska Gora, are left behind. At this time Kranjska Gora is packed with tourists, as we are mid-winter tourist season and providing accommodation has been a real challenge. Actually, the course itself was least challenging. .. Together, Golden Fox and Pokal Vitranc organizing teams hardened the course and General Secretary Srečko Vilar announced this will be »one of the best world cup races of the season«.

Srečko Vilar: »There is enough of snow and it is well hardened. I can already say all competitors will be skiing in equal conditions, which is very important also for Slovenian skiers. As weather forecast looks favorable, I would like to invite all fans to sunny Kranjska Gora on Saturday at 10.00 and Sunday at 10.15.«

Safety nets and rails were placed along course and finish area infrastructure is placed as well. Besides spectators tribune there will be a huge tent, divided in three areas. One for skiers, one for VIP guests and partner area for organizing committee’s partners.

Competitors can test the snow on Friday at 10AM with two runs at Podkoren slopes, following with team trainings on nearby slopes, including those in Italy and Austria.

Srečko Vilar: »Unfortunately, public bib draw is a single event for which we ran out of time in terms of obtaining event permits. This way, bib draw is scheduled during team captain's meetings. GS bib draw will be this Friday at 17.00 at Hotel Rose at Bled. Slalom bib draw will take place in Kranjska Gora, on Saturday at Hotel Ramada.«

Competitors will be accommodated at Bled, while some teams choose to stay at nearby hotels in Italy and Austria. Accommodation capacities in Kranjska Gora are fully occupied due to school holidays, so organizers were facing quite a big challenge in providing accommodation for FIS, Infront teams (TV and marketing), accompanying and organizing teams. But Manja Koklič, also a former Golden Fox competitor in Kranjska Gora, made sure everyone was accommodated.

Unfortunately, some guests, mostly politicians who already confirmed attendance at Maribor, cancelled their visit in Kranjska Gora. In Podkoren, we will not see the honorary patron of 56. Golden Fox, the Slovenian president Borut Pahor.

Srečko Vilar: »FIS Secretary General Sarah Lewis will attend the events, which is a special honor. We are expecting many visitors coming to Kranjska Gora from Slovenia, Slovakia, Austria and Italy. Accreditation office is located at ASK Kranjska Gora. We have a great collaboration with Kranjska Gora team, so traffic regime will be organized the same way as it is at Pokal Vitranc. Kranjska Gora team will take over that. Accredited guests will be provided with VIP shuttle service by Porsche Slovenija, running on routes between Kranjska Gora, hotel Kompas, Podkoren and finish area. As weather forecast is promising sunny weather, I would like to invite all spectators to use the well-marked walking path. Parking spaces will be available at Podkoren. We would like to remind everyone who purchased tickets at Eventim, that tickers are valid in Kranjska Gora as well. Even though Golden Fox is at home in Maribor and is now hosted in Kranjska Gora, I would invite you all to come and cheer for best skiers of the world!« 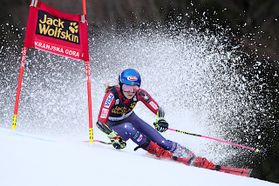