Everything is set for the 59th Golden Fox Tournament

With yesterday's successful snow control, the organizing team of the 59th Zlata Lisica Race received the final confirmation for the giant slalom races for the FIS World Cup in women's alpine skiing.

After the cancellation of the 2nd slalom race in Zagreb, all eyes are on Kranjska Gora, where the final preparations are underway for Saturday and Sunday's giant slalom, in which women's ski teams from 18 countries will compete - including Mikaela Shiffrin, who will be right in Podkoren had the opportunity to set a new record for the number of women's victories for the FIS World Cup, which is currently (still) owned by her compatriot Lindsey Vonn with 81 victories. The competition will be broadcast live on 5 continents by 18 television stations.

On the Vitranc slope, everything is already ready for the slalom course on Saturday, and FIS representative Markus Mayr took a look at the conditions on the field yesterday, and gave the organizing team the green light to hold the competition. The latter, despite the ungrateful conditions, with effort and zeal - and even with the help of helicopters - successfully consolidated and prepared the upper part of the track and thus fulfilled all the expectations set by the director of the World Cup, Peter Gerdol, during the first inspection.

Tickets for watching matches can be purchased at the venue itself, Eventima sales points and Petrol gas stations. The entrance for visitors opens at 8:30 a.m. on the day of the event, the first run starts at 9:30 a.m., and the second run continues at 12:30 p.m.

We also cordially invite you to join us on January 6th and 7th at the public draws for starting numbers, which will be further enriched by the performances of EMKEJ on Friday and the band Leonart on Saturday's draw. Both events will start at 18:00 at the Kompas Hotel parking lot, and entry to the events is free. 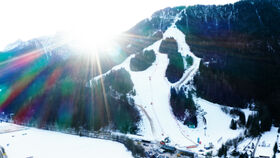