It started to snow and racecourse is open for skiers to the valley. In Hotel Arena, organizers have closed two most significant sponsorship deals with Zavarovalnica Sava as the general sponsor and Nova KBM as the sponsor of giant slalom world cup race. The Golden Fox is on!

David Kastelic, Chairman of the Board at Zavarovalnica Sava:

»This is the 55th Golden Fox event and for past 50 years it has been a world cup race. Without any doubt, we are talking about one of biggest competitions in Slovenia, which had to be relocated to Kranjska Gora last year. Nevertheless, this year we are sure the Golden Fox is hosted in Maribor where we enjoy the most amazing atmosphere. Zavarovalnica Sava is proud to take part in the event. See you on February 1st! «

John Denhof, Chairman of the Board at Nova KBM:

»Our bank is incredibly proud to be a part of such a big project for so many years now, for more than two decades. We are happy to continue the cooperation in the future. It is good for business as we take into consideration it is our social responsibility to support athletes and organizers. However, even more important are our values, which Golden Fox represents well. These values are competitiveness, brilliance and triumphant mindset and we trying to transfer these values to all our employees. We also strive to be the best. The Golden Fox puts Maribor and Slovenia on the global map and is sends clear message this venue is the place for a great skiing experience«.

» I would like to thank our sponsors! For past few years, event's budget had not changed, meaning it is evaluated to approximately 1, 1 million €. Around 70% of the budget is provided by international contract deals and local sponsors provide the rest. I would take this opportunity to thank Prime Minister Marjan Šarc who confirmed to be the patron of this year's Golden Fox. We are having a jubilee event, as we are organizing 50th world cup racing events. This year
we have some changes in schedule as giant slalom race starts already on Friday, as competitors must depart on Sunday to world cup event in Sweden. This enables us to create more attractive event for sponsors as they can enjoy the Friday for gatherings and networking. Moreover, we are expecting more pupils to join us at the event.

We are very pleased by the fact ski slopes opened for recreational skiers today and most of the work on racecourse is done. We are not thinking about having a plan B and we are sure to host the Golden Fox in Maribor. Management of ski slopes Marprom promised they would prepare a quality snow layer before snow control on 23. January. This way our skiers will have a good training on Pohorje slopes and men's team had shown an interested into doing the same.« 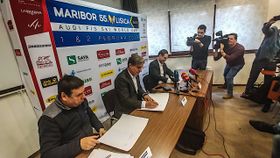